The new generation of PROFILTER’s travelling band screens is the result of many years of experience in the field of water treatment for communal water intakes, large industrial plants such as power plants and combined heat and power plants, the chemical industry and others. Our first attempts to use rubber belts in place of steel chains took place in the early 1990s.

A thorough analysis of the technical problems encountered in the operation of earlier, traditional solutions of travelling band screens has led to the construction of a screen that provides reliable operation for far longer (with the rubber carrier belt life exceeding 20 years), easy maintenance and high quality of water cleaning.

The PROFILTER travelling band screen technology makes it possible to use them in a chemically aggressive environment with no negative impact on their durability, resulting in lower operating costs. Such advantages inherent in the PROFILTER screens were achieved thanks to innovative, original design solutions that made it possible to eliminate the well known acute technical drawbacks of the traditional construction of the so-called frame- or panel type and the resulting problems in their use. The screening devices of the new design are very easy to install both in new facilities and in existing cleaning systems, by simply replacing the old screens. 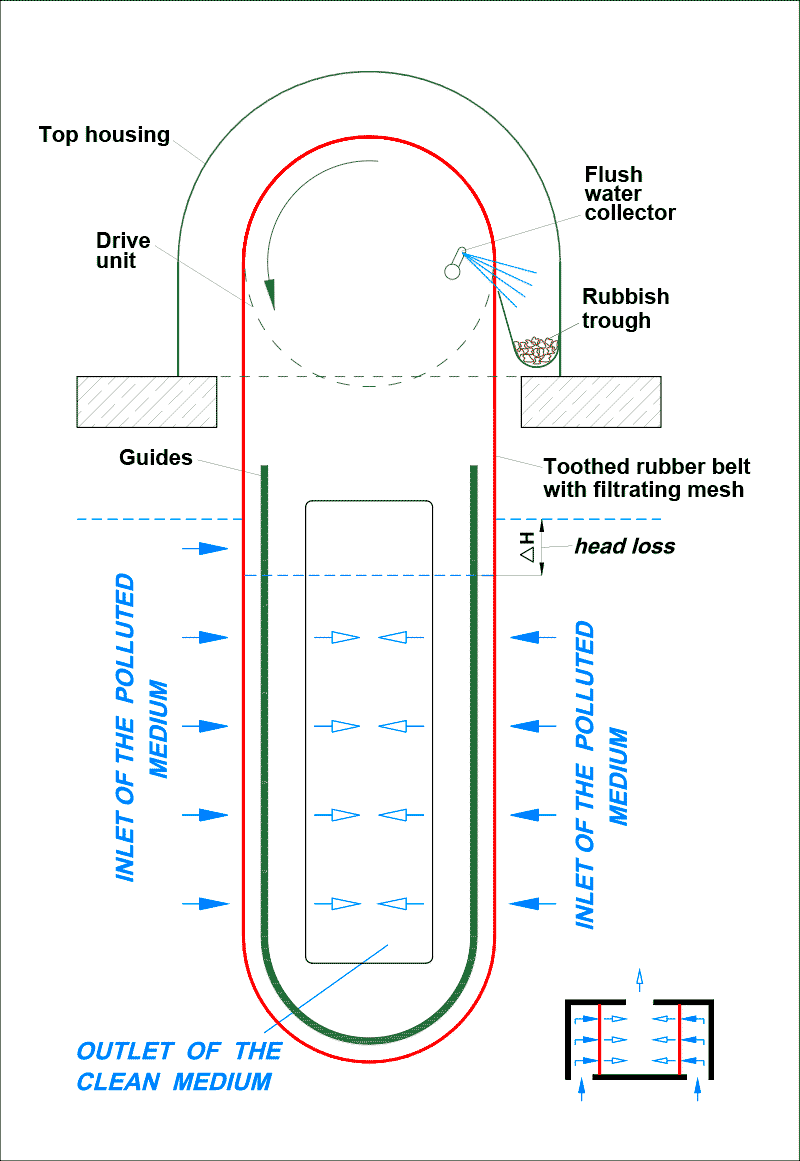 The basic principle of operation of the PROFILTER travelling band screen is the same as in conventional travelling band screens. Also the water flow schemes typical for such screens have been maintained, with the water flowing from inside to outside (in-to-out scheme), from outside to inside (out-to-in scheme) or through the screen (see the general schematic diagram showing the first flow scheme type). The advantages of the PROFILTER travelling band screens are essentially determined by the new technical solutions of the individual components of the screen. We prefer the out-to-in raw water flow scheme, as it is more efficient in the removal of screenings (debris) and thus prevents its depositing on the bottom of the chamber.

The heart of the matter in the design of the PROFILTER travelling band screen is the elimination of hinged joints of the cleaning mesh sections, or panels, and replacing them with an “endless” mesh band stretched between two toothed rubber carrier belts.The spacing between the belts is fixed by the horizontal stiffening beams attached to the outside of the mesh and the belts. On the opposite side of the mesh, the horizontal cross beams have their counterparts in the form of “shelves” whose function is to extract debris during the ascending movement of the particular portion of the mesh. The carrier belts with the mesh and the cross beams make a strainer assembly that is suspended with the carrier belts over the drive gear wheels, while its lower part is immersed in the intake chamber. The rubber toothed belts have inner teeth, extruded in the vulcanisation process, which engage with the sprockets of the drive wheels and thus transfer rotation from the drive shaft to the strainer assembly. The rubber carrier belts are reinforced with steel cables for better strength.

The PROFILTER strainer assembly is made with a far smaller amount of steel, while providing longer life, larger effective screening surface and much better cost effectiveness when compared with other designs of travelling band screens. The small amount of steel used in the screen has allowed the use of more expensive stainless or acid resistant steel in the making of all the parts having contact with water. This has practically eliminated the destructive effects of corrosion in water and made the screens capable of operation in a chemically aggressive environment, such as seawater. At the same time, the elimination of articulated joints radically solved the problem of their wearing, together with other moving parts, acutely speeded up by the presence of sand and other hard particles of trash in the water. As a result, the PROFILTER travelling band screen shows excellent durability – many times longer than screens of the traditional jointed-panel design – and exceptionally low operating costs.

For applications in extremely chemically aggressive environments, we offer screens with titanium mesh.

Since 2014, PROFILTER has been using drive belts with a special seal in the form of a replaceable elastic “lip” fastened to the edge of the belt along its entire length. The pre-tensioned lip, thanks to its shape and the pressure of inflowing water, is pressed against the slide guide and tightly seals the gap between the belt and the guide. Such a belt design provides excellent screen tightness, including on the guide bends at the bottom of the chamber, as the sealing lip of the belt flexibly adapts to the curvature of the guide bend and tightly adheres to it.

Effective sealing makes it difficult for sand and other hard particles to penetrate into the slot between the guide and the belt, thus effectively preventing them from wearing. In case of damage to the sealing lip, it can be easily repaired or replaced when the screen is stopped in such a position that the damaged section is above the surface of the water – without draining the screen chamber or making difficult underwater repairs.

The quality of water filtration and the durability of each travelling band screen depend to a great extent on the cleanliness of the filtering mesh itself, i.e. the efficiency of removing the screenings from the mesh. Trash successively accumulating, especially when the screen is stopped, will tend to clog the mesh. A partially clogged mesh causes the water head across the screen to rise, increased water pressure against the strainer assembly, increased frictional drag, deformation of the filtering surface and, consequently, poorer cleaning quality, as well as frequent breakdowns and hastened wear. That is why an effective self-cleaning system is used in the PROFILTER travelling band screen.

Several elements of the screen construction contribute to self-cleaning efficiency. The narrow “shelves” on the raw water side of the strainer assembly act as baskets to extract and lift the debris that will then drop into the debris gutter as the particular shelf reaches its peak position. Residues of the debris adhering to the mesh are flushed away with wide and flat clean water streams into the gutter. The flush nozzles, particularly those difficult to access in the case of the out-to-in flow scheme, can be conveniently cleaned by means of a brush inserted into the flush water collector pipe and operated with a handwheel accessible outside the screen top housing. The self-cleaning system is turned on automatically when screen operation starts.

The comprehensive solution of PROFILTER travelling band screens assumes a minimum burden on the staff in the everyday operation of these devices. The automatic screen operation control system will assist in optimizing their work depending on the actual needs. This will include automatic switching on of screen rotation and its self-cleaning if a wave of debris occurs in the inflowing water, resulting in an increase in water head across the screen, and stopping the screen when the water head drops below the pre-programmed level. When debris inflow is rather regular and low enough so that water head increase is not significant, it will be successively removed by the automatic periodical activation of screen operation according to a pre-programmed algorithm. 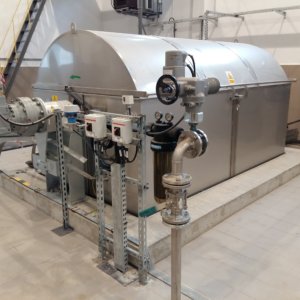 This site uses cookies to provide services of the highest quality. Further use of the site means that you agree to use them. I Agree